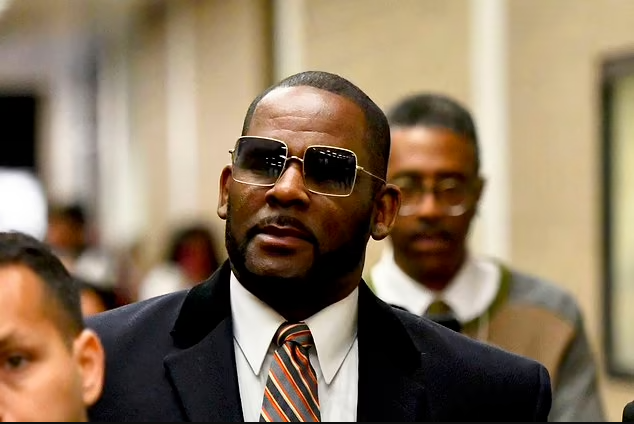 The jurors must consider 13 separate counts, some involving complex law and assessments of which witnesses were more believable.

They began deliberating on Tuesday September 13, after Judge Harry Leinenweber gave them jury instructions, including explicit descriptions of what constitutes sexual abuse.

Before they withdrew on Tuesday, Kelly attorney Jennifer Bonjean sounded indignant, likening government testimony and evidence to a cockroach and the government’s case to a bowl of soup.

If a cockroach falls into soup, she said, ‘you don’t just pull out the cockroach and eat the rest of the soup. You throw out the whole soup,’ said told jurors. She said of the prosecution’s case: ‘There are just too many cockroaches.’

The 55-year-old R&B singer is already serving a 30-year prison sentence after he was found guilty last year in New York City on charges of federal racketeering and sex trafficking.

‘When you are in the quiet of the jury room, consider the evidence in light of who is at the center of this case. Kelly’s victims: Jane, Nia, Pauline, Tracy and Brittany,’ Appenteng said, referring to five Kelly accusers named in charging documents by their pseudonyms or first names.

She said as Kelly’s fame boomed in the mid-1990s, his inner circle increasingly geared everything they did to what Kelly wanted.

‘And ladies and gentlemen, what R. Kelly wanted was to have sex with young girls,’ she said.

Bonjean described Kelly as a flawed genius who has been functional illiterate since childhood and was ill-equipped to navigate his celebrity and expanding wealth. She said having been abused as a child also deeply affected him.

The second day of the trial comes after a juror suffered a panic attack on Monday while hearing graphic closing arguments in the case.

The white woman who works for a public library said she couldn’t bear to hear ‘one minute more’ and was excused by the judge at Dirksen Courthouse in Chicago.

Kelly, who has denied the current charges, was acquitted in the 2008 case after a key witness refused to testify at the trial. Jurors at the time said that made it difficult for them to convict Kelly.